How does LED lights work?

LED stands for “Light Emitting Diodes”. It is a kind of semiconductor called “light emitting diode”. It is the true hero in the electronics field. For the traditional light source, it is firstly converts electrical energy into heat and then converts into light energy, whilst LED directly converts into light energy to achieve high-efficiency light emission with very little power waste.

LED is composed of two semiconductor materials (p-type and n-type). P-type and n-type materials are realized by doping atoms of another element into the background material. These new atoms replace some of the pre-existing atoms, thereby changing the physical and chemical structure.

P-type materials are produced using elements (such as boron) that have fewer valence electrons than intrinsic materials (usually silicon). N-type materials are made using elements (such as phosphorus) that have more valence electrons than intrinsic materials (usually silicon). The final effect is to create a pn junction. When a forward voltage is applied to the pn junction, the free electrons from the n-side and the holes from the p-side recombine and emit invisible or visible light. Each recombination of electron holes emits some light energy.

There are two types of LEDs, one is lamp type (with leads) and the other is chip type (surface mount).

(4) What determines the color of the LED?

The material used to construct the LED determines its color. From the energy band theory, the wavelength or color of the emitted light depends on the forbidden band or energy gap of the material, and different materials emit different colors of light. 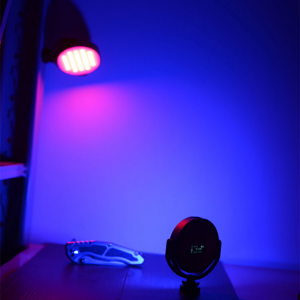